May 16, 2020
I got up this morning and made my way to the bathroom.  I was moving slow and trying not to fall.  My knee still hurts pretty bad.  Then I started reading Facebook, and all of a sudden, I began to cry.  Right there on Facebook was the news that my great uncle Whaler Stevens passed away yesterday.  I felt sad but knew if I stayed in bed, that depression would set in, so I made my way to the couch.   I told David and Alexandria about my uncle and then texted my mom.  She had also seen the news on Facebook.

I felt so nauseous, and then David handed me a plate of eggs, toast, sausage, and tomato.  It was a beautiful plate of food, but it had a big mushroom on top, and I swear I almost vomited.  I felt awful.  He had tried to do something nice, and for some reason, I felt sick.  I barely got down a piece of toast.

I decided to go outside for some fresh air.  After some ice water and sunshine, my whole day turned around.  We decided to take a little road trip and get out of the house!    I had me 😷  🧤 just in case, but I was not going to let this energy burst go to waste!  I used my waxer and La Vite and even put on some eye makeup.  I had a shower late last night, so it didn't take long to get ready.  I had lighting energy.  I was walking without my walker, and my knee had stopped hurting.  This usually is how a good day starts, and it only lasts a few hours.

Alexandria, David, and Jackson got ready, and then we all got in the vehicle.  I hooked my phone to the radio and started playing some rock music.  David needed to stop at the gas station, so I took the opportunity to use the restroom.  We were only down the road from the house, but I never miss a chance to use the bathroom because my bladder is so unpredictable.

Alexandria got some cheese sticks, and that’s when the hunger pains hit me out of nowhere.  I had not been hungry all morning, so now I was irritated.  I told David he should have got snacks because I didn’t think I could wait to eat.

Then my anxiety came roaring in like the Grand Rapids, and then the argument started.  Alexandria was eating cheese sticks while checking her phone.  She is a good driver, but I hate it when she texts and drives with her knee, especially when my grandson is in the car.  The more she texted and weaved the sicker I felt.  By the time we got to town, the argument had exploded.  She said things, and I cried, and then she made statements that hurt so bad that I said: “I hate you.”  She finally pulled over.  I ended up getting out of the vehicle and sitting on the side of the road.  David insisted on staying with me.  I cried so hard I thought I was going to die.  I thought about calling 911 as my blood pressure shot up.  Then it hit me.  I needed food and my morning medication.  I forgot to take the very medicine that keeps me from losing my shit in the car.  After about 30 minutes of arguing with David, he walked off.  A few minutes later, he handed me a bag of warm food.  I had sat on the cold concrete so long my knee was pounding.  I ate and took my medicine.

David was on the phone with Austin while I ate, and then he said Alexandria was picking us back up, and taking us home.  She was still in town at her friend Robins's house.  David said we would leave in the truck once we got home.  I sat in the back seat in silence all the way home, occasionally giving my grandson a sip of my cold McDonald’s tea.  I must have zoned out because I didn't hear Jackson asking for his apple, and Alexandria snapped at me.  When we got home, David got the cold packs out of the freezer for my body packs, and we left.  Jackson was crying so hard, and we promised to bring him something back.  I felt so horrible for arguing in front of him.  That kind of guilt sticks with a grandma for years, but I knew I needed some time out of the house away from Alexandria.

The truck doesn’t have air conditioning, but the cold packs worked to keep me calm as we headed to Sparta to get the board game I had been wanting.  Living with Hidradenitis Suppurativa makes getting hot dangerous, and recently I learned that heat could cause my Multiple Sclerosis to flare.  It was a peaceful ride to Sparta, and we saw the car show and heard the beautiful sounds of bluegrass coming from the town square.  David is a good driver when he feels good, and he seemed to be happy to have some time out away from the house.  He made a quick trip into Walmart to get the board game, water balloons, and dinosaurs.  My hometown had its own Monopoly game, so you know I have been looking forward to playing it!  Then we went to Mountain Snow, which is our favorite place in the summer to get cold icy treats.

On the way up the mountain, I stuck my legs out the window, and we stopped at the sunset rock.  It was beautiful.  As we made our way back home, my knee started hurting badly, and the heat became unbearable, then I smelled fish.  I knew David would love some, and I had been craving some myself, so we stopped and enjoyed a few pieces.  Alexandria text that she was nauseous, so we picked Jackson up a Happy Meal.

The minute we got home, I took a cold shower and laid down.  Jackson was happy, and the evening ended on a good note.  Alexandria and I haven't spoken much, but we did exchange I love you’s before she went to bed.

Life can be so hard sometimes for everyone.  Remember, you take time away for yourself, so you don't end up exploding on everyone around you. 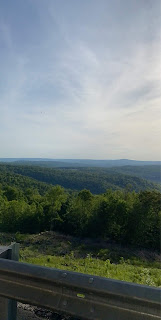 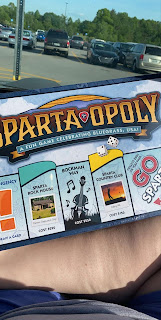 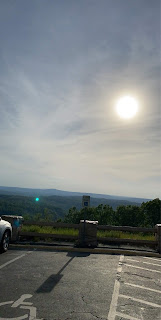 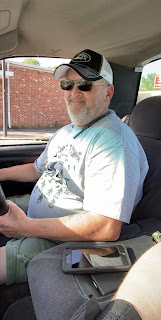 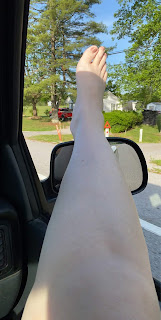 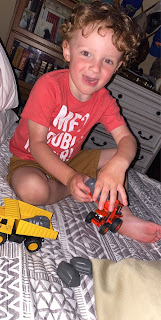 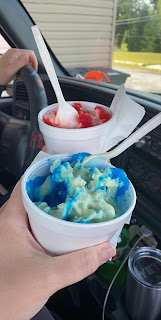